Festival of Pomegranates and Watermelon 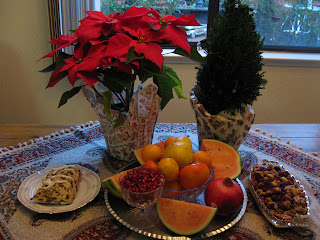 Tomorrow is the winter solstice, an event that Iranians call Shabeh Yalda (or the night of the sun god’s birth). The roots of Yalda go back thousands of years to Mithraism and this ancient religion’s belief in the struggle of good against evil. The longest night of the year was said to belong to the forces of evil, and it was the time when the sun god Mithra (also known as Mehr) emerged into the world to fight the dark powers of Ahriman.
Centuries later, the Zoroastrians refined the tradition and turned it into a two-day ritual. The solstice, with its long hours of darkness, belonged to Ahriman, who manifested his evil by creating chaos in the world. So on this day, the ancient Persians turned their society inside out: servants lorded it over their masters, children had authority over their parents, and the king would dress in plain white robes and mingle with his subjects. I see this as a kind of baiting game. If Mithra thinks that Ahriman is winning, won’t he fight all the harder?
The second day of Yalda, known as khoreh rooz, or day of the sun, belonged to Mithra/Mehr, and the fact that it arrived at all was proof that light had vanquished the dark.
The religious meaning of Yalda has been lost in modern times, but it’s still a good excuse for a party. People get together with friends to celebrate and dance through the night. But like everything else in Persian culture, the symbolism of the tradition lives on.
People eat fresh fruit , especially watermelon and pomegranates, as a reminder that the cold, bleak days of winter will pass and bring summer around again. Tradition also has it that consuming watermelon on the winter solstice will keep illness away. Pomegranates represent the crimson color of dawn, a prediction that light will banish the dark, and the days are growing longer. Ajil, a mixture of nuts and dried fruit, symbolizes prosperity and holds winter famine at bay.
My husband has childhood memories of his family sitting around the corsi, a low table covered in blankets with a brazier burning underneath. They’d eat the auspicious foods, read poetry, especially the work of the 14th century Iranian poet Hafez, and tell stories all through the long night.
So while everyone around me gears up for Christmas, I’ve been busy gathering the season’s bounty for Shabeh Yalda—and feeling like a squirrel collecting my winter’s hoard. I like to mix up the seasons, so my fruit bowl has watermelon, pears, apples, oranges, persimmons, and pomegranates. I’ve liberated the last of our Iranian pistachios from their hiding place (pistachios from Iran last a nanosecond around here). These I’ve tossed with California almonds, Iranian walnuts, dried mulberries, black raisins, and a handful of cranberries for color.
I like to mix up traditions, too. So a plate of German Christmas Stollen and the last roses from the garden go on the table next to the fruit bowl. And lastly, for a Zoroastrian touch, I add two candles and a small bowl of rosewater to reflect the candlelight. 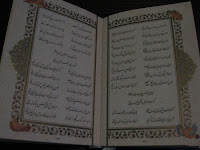 I’ve taken our copy of Hafez’s Divan down from the shelf and placed it with the fruit arranged on the table. On Shabeh Yalda, we’ll get together with a few friends, munch on the fruit and nuts, and read Hafez. And we’ll tell stories throughout the long night.
What about you? Do you celebrate the winter solstice, and if so, what traditions do you practice?
Posted by Heidi Noroozy at 7:00 AM