Gridi, Grido, Gridiamo per il Gelato (You Scream, I Scream, We All Scream...) 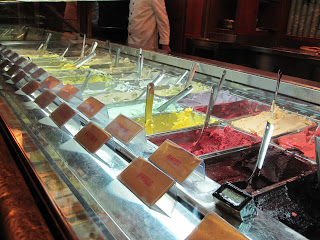 Birds are warbling in the pre-dawn hours. Women are painting their toenails. People are unswathing their throats of the scarves they’ve worn all winter. Well, some people are beginning to unswathe throats, but I digress. I’ll save throat swathing for another day. These are the classic signs that summer is approaching in Italy and the gelato season is upon us. Not that we’ve been deprived of gelato during the nippy winter. It’s always available. But when summer comes...oh, my.

The first signs appear in the late afternoon when the warm air invites people to stroll arm and arm down the street enjoying being outside at last. What better way to celebrate than to stop by the local gelato shop for a cone. But we know that summer prevails when the family piles into the car after Sunday lunch at Mamma’s. The car heads for a park, or a lake if there’s one handy, or some archeological site to enjoy the open air. After they walk to and fro admiring the fresh blooms on plants, or the sailboats, or ancient statues, they look for an outdoor café.

And everyone orders gelato. Well, almost everyone. Mamma may choose granita and the youngest child may choose a frozen confection-on-a-stick shaped like a cartoon character. But in general, gelato reigns.

Italian gelato differs from American ice cream in many respects, primarily the intensity of the flavor. Since gelato is sold by weight instead of volume, it isn’t whipped with air, so it’s denser. In addition, gelato is made with less cream, sometimes just milk. In my opinion, cream coats your tongue creating a barrier between taste buds and flavor. So again, the intensity of gelato bursts in your mouth. But the main reason that Italian gelato has such a potent flavor is legal. By law, gelato labeled strawberry must comprise thirty percent strawberries. This law 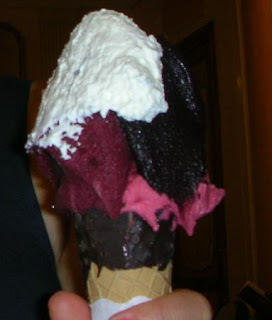 applies to all fruits and nuts, so the flavor is intense. Certainly, the vanilla isn’t thirty percent vanilla, nor is the chocolate thirty percent. But the flavors explode in your mouth nonetheless.

It’s customary to get at least two flavors. After you pay for the size you want to buy, you take your ticket to the counter and select from the array of flavors available. If you have a small size, you generally select two flavors, but with larger sizes you can have as many as four or even five. The choice is yours: cantaloupe and coconut, tangerine and tiramisu. Let your imagination soar. One shop in central Rome has about fifty flavors on display at any given time, and the choice is really difficult. My favorites there include pink grapefruit and champagne.

Once the waiter has filled your cup or cone, he or she will ask, “Panna?” That means “Do you want any whipped cream?” So even on an ice cream, er, I mean gelato, cone, you can have a dollop of whipped cream on top. It’s really hard to resist.

So please excuse me while I go out for my first gelato of the season.

I blog on alternate Thursdays at Italian Intrigues I hope you'll stop by.  Also, please visit my website at PatriciaWinton.com
Posted by Patricia Winton at 7:00 AM