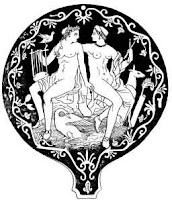 Picture a young fifth century BC woman in Volterra or Saturnia or another Etruscan town in what has become Italy. She gazes at her reflection in a polished bronze disk as she prepares for her marriage. She lays the mirror, polished side down, and regards the scene incised on the obverse. She may see Helen of Troy with Paris or another scene from Greek mythology.

More than 3000 such mirrors have been unearthed from Etruscan archaeological sites and dot museum collections around the world. The earliest, dating from the sixth century BC, exhibit scenes from Greek mythology, frequently featuring Aphrodite, goddess of beauty, love, and procreation.

As the Etruscan civilization evolved, the people adopted Greek mythological figures as their own, and Aphrodite became Turan, goddess of love, sex, and fertility. She’s depicted on the mirrors as a beautiful woman, often naked or naked to the waist, with cascading ringlets. When clothed, she wears Greek-style garments with many jewels, and often a tiara. Occasionally, she's winged.

She is sometimes paired with her lover, Atunis (Adonis) at which times she’s portrayed as a mature woman while he’s a boy. She may also have been consort to Laran, god of war. Her festival was celebrated in the summer, and she was revered enough by the Etruscans that their month Traneus (July) was named for her. 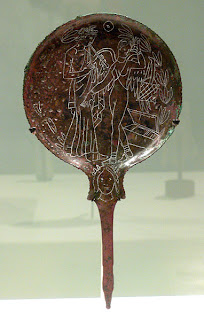 Many of the mirrors depict Turan accompanied by doves or, especially, a swan called Tusna. (We know the names of the people and creatures on Etruscan mirrors because they’re usually etched beside the figure.) Scholars believe the swan represents whiteness—perhaps purity. On one such mirror, the giant swan dwarfs Atunis and twists his beak to peck at Turan’s crown.

Turan morphed into Turanna, the good fairy of peace and love, who deals out fortune by the use of cards. From Roman times, a winning cast of the dice was three sixes, known as the Venus-toss. Turanna also bestows good luck by means of three cards.

That young Etruscan bride may pick up her mirror again. Perhaps the scene she observes is Aphrodite and Adonis, and she hopes for her own happy future, offering her fate to the figure on the back of her mirror.

I blog on alternate Thursdays at Italian Intrigues Please visit my website at http://PatriciaWinton.com
Posted by Patricia Winton at 7:00 AM