Off the Beaten Track: A Visa to the Ancient World 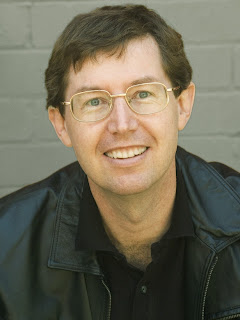 Novel Adventurers are very happy to welcome our guest blogger today. Gary Corby is the author of The Pericles Commission, the first in a series of murder mysteries set in the ancient world.  He lives in Sydney, Australia, with one wife, two daughters, four guinea pigs, and two budgies. You can catch him on his blog at GaryCorby.com, on twitter, and on GoodReads.
Novel Adventurers is all about different cultures and storytelling, so this is the perfect place to discuss a question close to my heart: when you write a book, does it help to visit the places you're writing about?
The answer should obviously be yes, but I write murder mysteries set in the ancient world.  My detective Nicolaos walks the mean streets of ancient Athens as an agent for the up and coming young politician Pericles, keeping the city safe from enemies both domestic and foreign, while his fellow citizens go about the job of founding democracy, drama, philosophy, history and science.  The adventures of Nicolaos are really an invitation to come join the world of classical Greece, and watch what happens as western civilization is born.
There lies a problem, because short of a time machine, visas to 460BC are hard to come by.
Can I really bring this ancient culture back to life?  Well if I can't, you'll never know the difference, because you can't go back in time to check me.  But wouldn't it be nice if I could have some assurance that the people I describe, the architecture, the way of life, the shops and the food and the ceremonies and the way the children played in the street, had some patina of reality?
Fortunately I can, sort of, because some of the places I write of still exist.  Dotted around the eastern Mediterranean are some amazing ruins.  They're ruins, yes, but with a little imagination and a lot of archaeology you can tell immense amounts about the life and times of our cultural ancestors.
It's possible to visit the Acropolis in Athens, for example.  There's a slight problem with that, because the Parthenon that everyone goes to see hasn't been built at the time I'm writing.  Yet I've stood there and discovered for myself how far you can see in each direction and felt the breeze.  More importantly for my books, I've stood on a rock outcrop next to the Acropolis, one which is called the Areopagus, and which figures heavily in my first book.  In fact it's because I've stood there that I was able to write my first book.
I once visited Ephesus, which back then was a thriving Greek city just within the borders of the Persian Empire.  Ephesus was abandoned in medieval times, which was bad news for the city but wonderful news for me.  Ephesus today is part of Turkey and a magnificent ruin totally worth visiting.  Unlike Athens, which is covered in some pretty awful modern buildings, Ephesus is there to see as it was in Roman times.  Not my period, but it's not so hard to walk the streets and subtract the Roman additions in my imagination.  The same applies to Olympia, where the ancient Olympic Games were held.  Needless to say, Ephesus and Olympia feature in my second and third books. 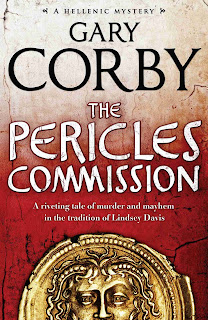 So it can be done.  The other places—very important places!—to get a visa to ancient Athens are in Paris, London and New York.  The Louvre, the British Museum, and the Metropolitan are my friends.  Also the Getty and any number of smaller museums.  In a very meaningful way, they have more of the ancient world than the ruins in Greece, because they can show you the everyday things like cooking utensils, and kids' toys.
So I might not be able to live in ancient times, but the archaeologists can get me a visitor's pass.
Posted by Alli Sinclair at 7:00 AM