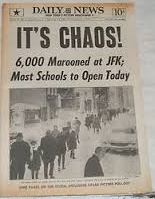 As I began my first trip to Italy, I became one of 6,000 people stranded at Kennedy airport during the February 1969 nor’easter that shut it down and paralyzed the northeastern United States for three days. I was 23, alone, and a fledgling traveler. Only the kindness of strangers got me to my destination.

I was moving to live near the place I most wanted to visit in the world—Florence. I had booked a seat on a charter flight—the company’s name long forgotten—from JFK to Frankfurt with another flight to Italy. On arriving at JFK, passengers were to call Brown’s Taxi for transport to the North Terminal. I think that ride was included in the charter fare.

The snow began falling on February 9—two days before my scheduled departure. Flights from JFK were being canceled, and people were sleeping in terminals. In Washington, DC, I watched the news with alarm. My plane would surely not go. I called the charter company, and they told me to come on to JFK. By the 11th, snow was falling in Washington, too. Another call to the charter company. More instructions to proceed. I snapped my suitcase shut and called a taxi. Before it arrived, Eastern Airlines called to cancel my flight to JFK. My heart raced as I called the charter company again. They told me that the transatlantic flight was still on. My anxiety level ratcheted up a couple of notches until a friend suggested that I take the airline shuttle.

The shuttles that ran from DC to New York in those days didn’t require a reservation. You just arrived at the airport and climbed aboard. The beverage carts had been converted to ticket sales counters, and you simply bought the ticket on board. Forty plus years ago, they even accepted cash. As my taxi approached Washington National Airport, the driver told me the shuttle to JFK had been canceled, but the one to Newark was still flying. I gulped and had him drop me there.

As luck would have it, my shuttle seatmate traveled frequently from New York to Washington. “How can I get to JFK?” I asked. “Take the helicopter,” he replied, telling me the route to take once I deplaned, where to turn, and how much it would cost. At the terminal, Shuttle Man pointed me in the right direction, and I soon found myself aboard a helicopter flitting between airports.

As luck would have it, my helicopter seatmate was booked on my charter flight. A travel-wise woman just a couple of years older than I was, she took the lead when we arrived at JFK and called Brown’s. We made our way through the terminal, past sleeping people, past crying babies, past mounds of trash. At the pickup point, we met other passengers for our charter. Eager to depart on time, we joked about “a little snow.” After more than an hour’s wait, our confidence waned. Finally, a big old car—brown, of course, with a few rust spots—pulled up. We looked at each other, shrugged, and five or six of us piled in. There was room for all, plus our luggage.

The taxi ride proved to be just as challenging as the other legs of the trip. Every route the driver tried was blocked by police or snow banks. We were getting dangerously close to departure time. I could hardly breathe. But the driver persevered. He went outside JFK, chugged along highways around the airport, and found another entrance. That strategy worked, and soon we climbed out at the North Terminal. I relaxed then, certain that we’d be airborne soon. 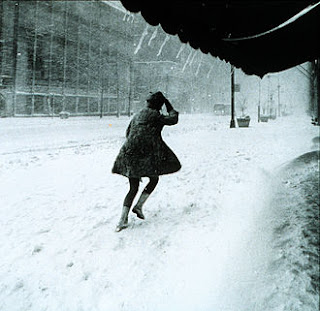 At the check-in counter, we were told to wait, and we searched for a place to sit. A snow plow had deposited snow on the roof; water dripped from the ceiling and puddled on the floor. The snack bar had closed because it had run out of food. The vending machines were empty. It was now past 6 PM. I hadn’t eaten since my morning coffee and toast. My stomach rumbled, and Helicopter Woman shared her candy bar.

At last, a company representative announced that we would not be flying that night. We were herded onto a bus which slid on the slush as it careened toward a distant hotel. There we were served a box lunch (a dry sandwich, some chips, and an apple) and assigned rooms. People had to share, so Helicopter Woman and I joined forces. I worried about sleeping in the same room with a stranger, and I remember tucking my purse under the covers with me. The following morning, we were given coffee and stale donuts before being bussed back to the North Terminal.

Finally, we boarded. Since I’d spent the night unscathed, I stayed with Helicopter Woman. With no assigned seats, my savvy travel companion snagged an exit row and we settled in, stretching our legs. A flight attendant (or stewardess as she was then) soon arrived with a man in tow. “I want a man to sit by the emergency exit,” she explained, “so this fellow will take the remaining seat in the row.” I kept my window seat.

As luck would have it, Emergency Man was booked on the same flight I had from Frankfurt. We teamed up for the remainder of the journey. The flight was uneventful, except that our meals were out of order. We were served the dinner we would have had the previous night for breakfast, and for lunch we had what passed for scrambled eggs and bacon.

By the time Emergency Man and I reached Germany, our flight was long gone, and we couldn’t get another one for a couple of days. He suggested that we take the train and led me to the station. We bought our tickets, had something to eat, and soon were riding the rails south. I admired the gingerbread houses along the German countryside and dozed a bit. My excitement grew as my energy level drooped.

We had a compartment to ourselves, second class though it was, and Emergency Man showed me how those old trains let you convert the seats into makeshift beds. Seats opposite each other could be pushed down until they met in the middle, leaving one end slightly elevated like a pillow. I actually slept, but we were nudged awake by ticket checkers and passport control at the Swiss border. We tunneled under the Alps and stopped again for ticket checkers and passport control in Italy.

My heart rat-a-tat-tatted in my chest. I was here! At the next stop, we bought crusty rolls filled with salami from a cart on the platform. The red-tiled roofs sped by, and I munched my first taste of Italian food as the train wended its way to Florence.

Join me on alternate Thursdays at Italian Intrigues where I write about food and wine, mysteries and crime. And please visit my new website at www.PatriciaWinton.com